From Charles Bliss to Città in CAA: a story of accessibility

Charles Bliss' history and ideals between past and present 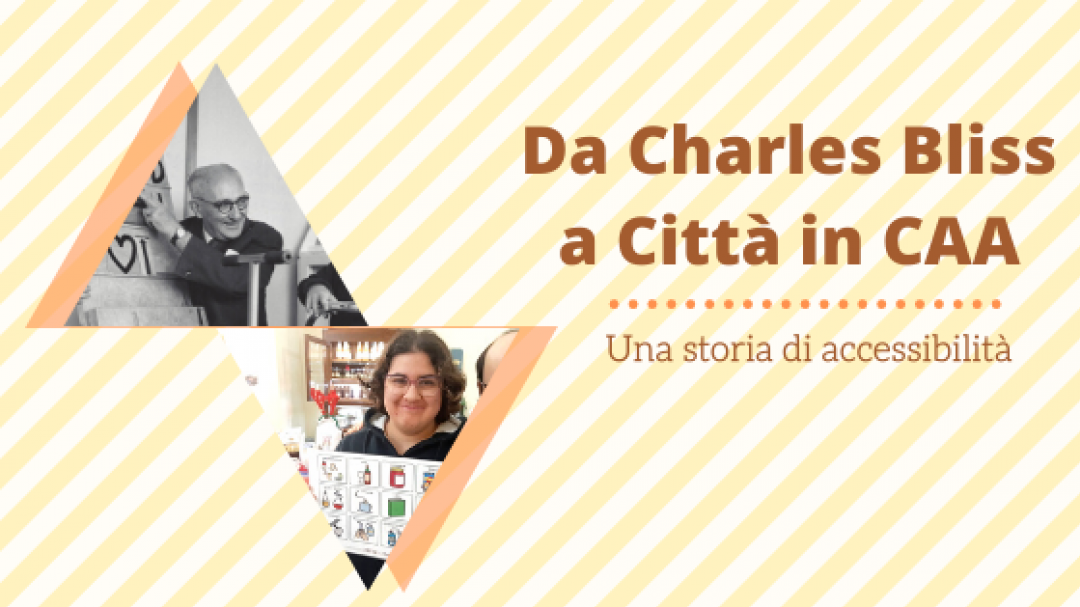 Who was Charles Bliss?

Charles Bliss (born Carl Blitz) was an Austrian engineer who lived in the 20th century.

He has been exposed to languages since his childhood. Jewish by birth and citizen of the Austro-Hungarian Empire, from the very beginning he comes into contact with standard German, Yiddish, traditional Hebrew and the many dialects of the Empire. It is a paradox that Carl never developed a passion for languages, he even found it “nonsense to express the same thing with many different words”. That’s why he chose to focus on scientific subjects and performing arts.

The exposure to languages continues through his transfers around the world. The first and most dramatic one is to Germany, to the Buchenwald concentration camp, where he was deported just before the beginning of World War II. Released from Buchenwald, Carl moves to London, hoping to meet his beloved Clara Adler again. In order to make sure that there’s no link with the word “blitz”, that means “bombing”, Carl changes his name into Charles Bliss. But Carl, now Charles, has to wait three more years before meeting Clara again. And this happens in Shanghai.

Once in China, Charles, who never liked languages, dedicates to the study of Chinese and gets passionate about its special writing system, where characters can be “read and understood from people who speak different languages". And Charles has an epiphany: he wants to try and create an international language that is understandable by everyone.

Bliss dedicates all his life to this research, starting in 1943 with the publishing of “New World of Writing” in Our Life. In this article, he suggests a picture writing system that can be understandable everywhere. His article becomes the forerunner of his most important work, published only a few years later, after Charles’ and his wife Claire's moving to Sydney.

It’s in 1949 that Charles publishes for the first time his 3 Semantography volumes (that’s the name he gives to the worldwide writing system). The subheading of the work is “Bliss Symbolics - a logical writing system for an illogical world”. The aim of Bliss’ work is to create an auxiliary language that allows all the world to communicate and go beyond every language barrier. 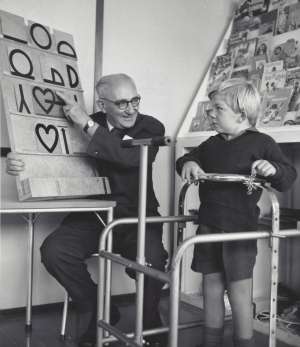 The Semantography communication system is based on around 100 symbols (even if Bliss himself claims that 32 would be enough), that can be combined and give birth to any existing concept. Besides symbols, Bliss also develops markers and classifiers to specify morphological and synctactical categories.

The aim of Bliss and his symbol system was to overturn the myth of the Tower of Babel and break down language barriers. In his imagination, the Bliss symbols would have been used, for starters, “in public places, cinemas, hotels and then on passports, film subtitles, newspapers, magazines". The system gains a certain success with language scholars and is acclaimed by Bertrand Russel, but does not have the same effect on the scientific community.

1971 is the turning point: Semantography draws the attention of Ontario Crippled Center, a Canadian hospital that wants to use symbols as “a method that children with poor or no language skills and limited physical abilities can use to communicate their ideas through visual symbols". These words appear in the first letter that the centre writes to Bliss who, besides the initial skepticism and the fear that his system could mistakenly be expanded and made more complicated, in his words a “Babel of symbols”, takes on the challenge and begins a long and fruitful correspondence with the Canadian centre.

THE LETTERS BETWEEN THE ONTARIO CRIPPLED CHILDREN CENTER AND CHARLES BLISS ARE THE FOUNDATION STONE OF WHAT WE KNOW TODAY AS AUGMENTATIVE ALTERNATIVE COMMUNICATION, OR AAC.

Even if Bliss’ symbols are the forerunner of the modern AAC, their initial aim was different. As seen before, Semantography aimed to an auxiliary language, an international language that could help to overcome language barriers. AAC is instead a support for communication achieved through different strategies, of which symbols are the most popular.

AAC symbols are thought to go along the text to ease its  understanding, not as a language system. As a result, the original Bliss’ collection was taken as a reference and updated, and new sets were created. These new ones are different from the original collection and different from each other: the first were the PCS (Picture Communication Symbols), created in the USA in the ‘80s, then the WLS (Widgit Literacy Symbols) created in the United Kingdom in 2000, then the Arasac in Aragon.

Born as a simple support for communication, today the AAC is used worldwide to create softwares and, especially in Italy, inclusive picture books. These are dedicated to preschool and school children, to children who do not speak Italian and children who have verbal language problems, in particular children with autistic spectrum syndromes. Furthermore, since 2017 thanks to the “Città in CAA” (City in AAC) project, AAC symbols have been used in different cities in Romagna (a region in Northern Italy). 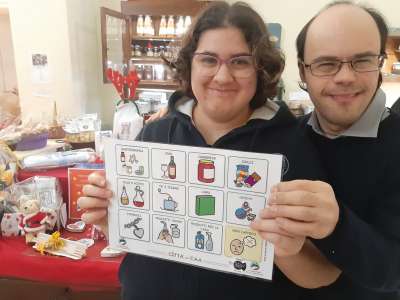 The Città in CAA project by Fare Leggere Tutti Aps and Autismo Faenza Onlus started with the aim of making public places more inclusive and understandable for people with complex communication needs. The municipalities that have joined the initiative to date are five: Castelbolognese, Faenza, Ravenna, Russi and Solarolo.

In each of the 5 municipalities, the shopkeepers who join the project make available  AAC adapted materials in their shops, adjust their spaces and train their staff to ease the communication, promote social skills and foster the autonomy of both people with complex communication needs and foreign guests.

Even if we did not do it intentionally, we like to think we have found, in our small way, a meeting point between the modern AAC’s aims and Bliss’ original ones, that sounded so far apart to him.

WE TRY EVERYDAY TO CREATE A DAILY LIFE SCATTERED WITH SYMBOLS, JUST AS CHARLES BLISS IMAGINED. SYMBOLS TO BREAK DOWN BARRIERS OF ANY KIND. BECAUSE, AS HIS COLLABORATORS CLAIMED AFTER HIS DEATH, CHARLES ALREADY DID HIS JOB.
NOW IT’S OUR TURN.


> LEARN MORE ABOUT THE PROJECT <